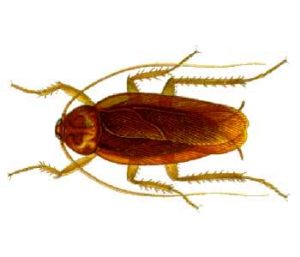 The American cockroach is the largest of the species common to Pennsylvania. This species often becomes abundant in city dumps and is most common in the basements and steam tunnels of restaurants, bakeries, food-processing facilities, and grocery stores.

Adults are approximately 1-1/2 inches long and reddish brown, with fully developed wings that cover the entire length of the abdomen. Both male and female are fully winged. The wings of the male extend slightly beyond the tip of the abdomen, while those of the female are about the same length as the abdomen. Nymphs are similar in appearance but are smaller and do not have wings. American cockroaches are capable of flying but rarely do in northern areas of the United States. The American cockroach can be identified by its large size and reddish brown color with faded yellow edges on the thorax.

When indoors, the nymphs and adults are usually found in dark, warm and moist areas of basements and crawl spaces, and in and around bathtubs, clothes hampers, floor drains, pipe chases, and sewers. They are also common around the manholes of sewers, and on the undersides of metal covers over large sump pumps. In the north, this cockroach is often associated with steam heat tunnels. Where steam heat tunnels are not found, the American cockroach is restricted primaril to large institutional buildings. It has also been observed migrating from one building to another during warm months in the north. Occasionally, the cockroaches infest sanitary landfills and can survive Pennsylvania winters because of the warmth generated within the piles of trash.

American cockroaches feed on a variety of foods, with an apparent preference for decaying organic matter. The adults can survive two or three months without food but only about a month without water.

The following cockroach control measures are effective in disrupting the roach life cycle, killing existing roaches, and their colony when implemented together. The guidelines below also serve as excellent preventative measures that effectively stop cockroach invasions before they begin.

Look for cockroach hiding spots in warm, dark, tight places near food and water using a flashlight and mirror. Confirm any suspected habitats by using sticky traps. These traps will not attract cockroaches, but they will allow you to determine if you have an infestation, and where the bugs are living. Sticky traps should be placed at the seam of floors and walls, and in potential high traffic areas. Carefully check large appliances and furniture or items that have been in storage for cockroach egg cases and destroy them.

If you have an infestation, eliminate food sources by cleaning up crumbs on floors, in cracks and crevices, or on counters. Wipe up spills and clean dirty dishes as soon as possible, and keep food in sealed containers or in the refrigerator. Throw trash away in containers with liners and tight lids, and empty them frequently. Regularly vacuum cracks and crevices to remove any food sources, including cockroach eggs or droppings, since feces contain pheromones that attract other roaches and feed young ones. Frequent vacuuming also goes a long way in preventing cockroach allergies.

Removing cockroach hiding places and entry points will drive cockroaches away and prevent future infestations. Inside the home, seal cracks in dark places like cupboards or building cracks with caulk, repair water leaks, and remove moisture in crawl spaces and other dark areas by increasing ventilation. Weather-seal doors and gaps around windows, and caulk around escutcheon plates that surround pipes or faucets that provide access to the wall voids or any other area that roaches could easily enter or hide. Eliminate clutter, especially piles of magazines, newspapers, cardboard or rags.  Outside, remove stacks of wood and trash to minimize potential moist habitats, and trim shrubs and branches to increase light and ventilation. 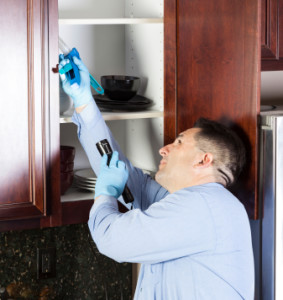 In addition to various do-it-yourself cockroach repellents, there are also a number of practical steps you can take to keep cockroaches out and prevent an infestation.

Eliminate food sources – store dry foods in tightly sealed containers or in sealed plastic bags and do not leave food sitting out on counters. Do not leave liquids in sinks or buckets.

Clear all waste food and liquid spillage – clean up food debris from food preparation areas, under sinks and appliances. Empty the rubbish on a daily basis and keep all garbage or compost in sealed bins.

Remove pet food – and drink and litter trays before nightfall.

Rinse cans, bottles and plastics – before putting them in recycling bins.

De-clutter – remove old stacks of newspapers and magazines, unused cardboard boxes and all other forms of clutter from the floor or bottom of cupboards. Cockroaches release an aggregation pheromone in their droppings telling others they have found a safe harborage.

Varnish or paint wood shelves – to seal them, and wipe them clean regularly.

Seal entry points – to deny access to cockroaches. Key risks are gaps around pipes, drains and common walls with neighboring properties when dealing with German, Oriental and American cockroaches. Even tiny cracks around skirting boards and behind electrical sockets should be plugged to reduce potential hiding areas.

If an infestation does happen, chances are you will need to bring in an expert Exterminator in Philadelphia to aid with the cockroach extermination in Philadelphia. With over two decades of experience has the necessary skills and qualifications to appropriately assess your cockroach problem and draft up a custom tailored remedy to exterminate cockroaches in your business, home, office or rental property.

As cockroaches are nocturnal insects there should be cause for alarm if you notice one crawling around during the day. This usually means that there is a larger cockroach infestation that you are not noticing when it is dark. Places to check for an infestation include behind refrigerators, sinks, stoves and under floor drains. Cockroaches can also flatten their bodies to fit into small and narrow spots and may be found hiding underneath mats and within cracks in your walls. Additionally, The Ardvark is your go to crew for Ant Extermination in Philadelphia.

Additionally, some species of cockroaches emit a strong musty odor that is unpleasant to humans. They also tend to lay oval-shaped eggs behind furniture and sometimes even between books and other nooks and crannies.

The American cockroach is said to thrive in warm temperatures. They can only survive in temperatures averaging around 29°C. Due to this, they generally cannot adapt to dry areas unless they have access to water. Their main breeding grounds are damp or moist areas. They generally cannot survive in cold or warmer continents but due to the development and increase of residential areas, buildings, and other houses, the American cockroaches was able to adapt and live in these areas. This is why cockroaches generally live in the basements or sewers of buildings and the like.

The American Cockroach is known to be the fastest of all running insects. Thus, they can travel very fast and can quickly run into tight and closed areas such as cracks and even the gaps under the door.  Fastest known recorded speeds of roaches run up to 3.4 miles per hour allowing it to easily run pass 50 of their body lengths in just one second. Like many insects, roaches have compound eyes having over 2000 eyes in each lens.