Tips for Attracting Opossums to Your Property

Although some people think opossums are pests, they are in fact useful little animals in your garden. They eat real pests such as slugs and small rodents and rarely cause problems themselves* (see bottom of page). Opossums are also entertaining to watch because of their agility and intelligence. As with other wildlife, much of the natural habitat of opossums has been lost to development and agriculture.

Opossums inhabit a wide variety of habitats and are not at all territorial. They naturally prefer deciduous wooded areas near water sources, but can also be found in farmlands or marshes. They have become very common in urban, suburban and farming areas. They are wanderers, highly nomadic, and do not staying in one specific territory. Even mothers with young will spend only a few nights in any given place. They reside in a variety of homes including abandoned burrows, tree cavities, hollow logs, attics, garages or building foundations. They are not adept at digging, so they often utilize burrows that another animal, usually a skunk or woodchuck, may have excavated. They may even share dens with other species, including rabbits, skunks, raccoons, other opossums, and small mammals.

here are a few ideas for attracting opossums the right way…

Encourage other wildlife to provide opossum prey by gardening organically and planting a dense variety of plants. Opossums need to obtain most of their food from natural sources.

It’s best not to attract wild animals, including opossums, into an area with food. That is a good way to create a nuisance animal that ends up being killed. Food left outside may also attract mice, skunks and raccoons, which can quickly become pests. If you do decide to leave food for opossums, it can be as simple as a couple of bowls on the ground. Omnivorous opossums appreciate meaty treats such as cat kibble as well as fruits and vegetables. DO NOT LEAVE HUMAN FOOD, especially junk food. Opossums may well love such food, but it is not good for them. Ideally, put the food out in the evening, watch the opossums feeding, then remove the food bowls so you don’t wind up feeding rodents.

Providing shelter material or habitat is the best thing to do to attract opossums, but due to their nomadic nature this may not be successful. In many states it is not legal to transport/relocate wild animals. If this is to be done, the animal should be trapped humanely in a havahart trap and taken several miles away to a forested area near a water source (stream or pond). If the animal was a nuisance, near a barn or chicken coop, cleaning up all food that would attract opossums, will solve the problem. Opossums do not need to be lethally trapped in order to discourage them.

Install a opossum nest box to mimic the tree holes that opossums use for nesting. An opossum nest box is essentially like a large bird box with a 5-inch diameter hole near the top. The Australian government provides detailed instructions for making opossum boxes, which are the right size for North American opossums as well. Attach the nest box 6 to 10 feet up in a tree.

Provide an underground burrow or den. Some opossums prefer to nest in the abandoned burrows of other animals, so make an artificial one. Dig a trench about a foot deep and a foot across, then cover with sheets of scrap wood. Leave an entrance gap of a few inches. Cover the wood with anything you like, such as plants, a small shed or a pile of scrap wood and branches to provide a refuge from other wildlife. 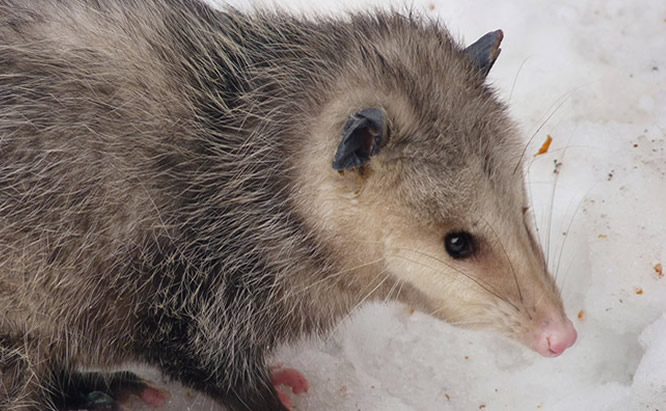 EXPERT TIPS FOR TRAPPING AN OPOSSUM

Have you ever heard the phrase “playing possum?” This actually originates from the tendency of the opossum (or simply “possum”) to involuntarily play dead when startled or threatened.

Opossums are marsupials; in fact, they’re the only marsupials residing in North America. While they like to create dens in hollow trees or the vacated burrows of other animals, opossums can also find a home under your deck, shed or house. Because of their unspecialized biology, flexible diet and reproductive strategy, opossums are successful colonizers and survivors even when their habitat has been disrupted.

While opossums may be good at playing dead, it doesn’t mean they’re harmless. All that digging and burrowing can compromise the foundation of structures, one of the reasons why you need to send them packing if you discover them on your property. They’ll also feast on just about anything, including your garbage.

GET RID OF POSSUMS: HOW TO TRAP AN OPOSSUM

Opossum traps come in a variety of sizes and styles. Possum trapping tips include placing traps wherever you’ve seen signs of their activity, such as burrowing. Before setting a trap, always check with your local game commission to ensure you’re allowed to trap in your area. Also, avoid trapping during early spring and summer to prevent separating babies and mamas

Although they aren’t particularly finicky eaters, the best possum bait is fish or apples. Baiting opossum traps with canned pet food also works well. While there are differences of opinion as to the best bait for opossums, all professional trappers agree, the smellier the better. (No, your old sneakers won’t do the trick!) One of the most important opossum baiting tips is to smear the bait in, on and around the trap.

Tips For Living With Opossums

As the development of once rural areas increases, the opossum continues to be pushed out of its natural habitat and forced to live in a more urban environment. Opossums are extremely adaptable and have successfully made the transition to accept people as their neighbors. With a little tolerance and understanding you can do the same for the opossum, and we can all happily co-exist.

Considered rodents by many, this is a common misconception. Opossums are marsupials, or pouched mammals, and are related to the kangaroo and the koala. The opossum holds the distinction of being North America’s only marsupial. We should not consider them as pests, but beneficial to the environment, as they eat all kinds of bugs and insects including cockroaches, beetles, cricket and spiders. Snails and slugs are considered a delicacy. They also help keep the rat and mouse population in check. Opossums have well earned the title of “Nature’s Little Sanitation Engineers.”

Opossums should be allowed to live in their natural habitat. They are opportunistic animals and will often move into an area that has been damaged and then vacated by another animal. Unfortunately, the opossum is usually blamed for the damage.

Opossums are transient animals, staying only 2-3 days in an area before moving on. Removal is neither necessary nor desirable. Wildlife experts agree that if opossums were eliminated from an area, the population of roof rats and other pests would proliferate.

If you find an opossum continues to return to your area, try eliminating the things that are attracting it. Clear away bushes, woodpiles and other hiding places, pick up fallen fruit from trees, and do not leave pet food out over night. Try leaving an outdoor light on at night.

Possums live in the trees and occasionally come down to the ground to look for food. Brushtail Possums live in tree hollows and Ringtail Possums in the south of Australia build a nest out of sticks. Both kinds of possum may live in our roof if they can’t find suitable homes in trees. Possums live in territories and mark the boundaries with smells. They rub the scent from glands under their chin, chest and base of tail against trees so everybody knows who’s the boss in the area. Possums protect their territories by fighting off intruders.

You can look after possums in your own backyard

Many of our possums are dependent on tree hollows. They need them to sleep in during the daylight hours. Competition from other possums, birds, bats and gliders along with the clearing of many old trees has reduced suitable hollows and possums often move in to the roof or walls of your home. They are not quiet – if you have a possum in your roof, you will soon know about it!

What is a backyard buddy?

Be a backyard buddy

It’s easy. All you have to do is care… and take a few simple steps. Step one is to find out what possums do and do not like.

Eucalyptus leaves – they are the Ringtail Possums’ favourite food. They, and Brushtails, also eat flowers, fruits and veggies. In your garden they love to eat roses, gardenias, fuchsias and passionfruit.

What to do if there’s a possum in your roof

Do you have a furry housemate you’d like to evict? Here are four simple and gentle ways to move them along.

Both are nocturnal, but brushtail possums are about the size of a cat, with bushy black tails, thick grey fur and large ears, while ringtails are also grey, but are smaller, with small ears, and skinny, white-tipped tails. Brushtails favour big old gum trees with hollows to nest in, but these are becoming few and far between, forcing them to look for alternative accommodation – and that may mean your roof.

Buy or build a possum box or two, and put it in a sheltered spot in your garden at least 4 metres off the ground. Check the boxes regularly to make sure that bees, wasps or pest birds such as starlings have not taken up residence.

Look carefully for any gaps or holes around the eaves, then wait until dark. When you see the possum leaving the roof, block the gap with wood or chicken mesh.

If you’re struggling to see when your possums are leaving the roof or concerned that one will be left behind and become trapped, a pest controller will be able to advise on how to install a one-way door that will let the possums out but not back in.